While in London, I had the privilege of checking out two events during London Fashion Week. I had realized a bit late (literally three or four days before the start of fashion week) to attempt to line up amazing seats at Burberry or Michael Kors but I did score some nice invites. What I would have given to be part of it and run into some of my favorite London fashion influencers (Patricia Bright or Shirley Eniang for starters)?!

However I did go to a Stradivarius launch party where we (we being me and my Canadian friend) got goody bags, roamed the store with free drinks and took photos using the photo booth. It was really cool seeing as the event was on Oxford Street and that day, the temperature was beautiful. The epitome of a lovely summer day and night.

Two days later, I got to see the real hard fashion at a Palmer/Harding preview for Fall. 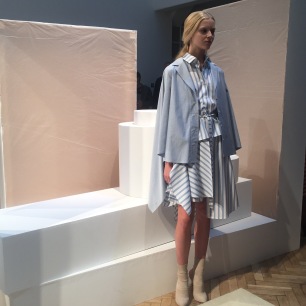 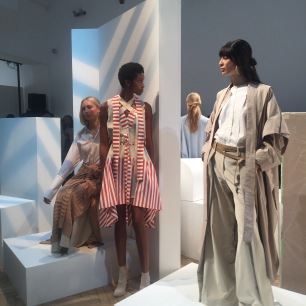 It was a bunch of neutrals, navys and reds – all done up in high fashion styles I honestly probably can’t pull off.

I felt so cool in London. Like, look at me at a fashion show and living life. I mean, the show did get a boring but that was mainly my bad. As it was a presentation, after all the girls walked, they came back out to hang around for late comers to see. I decided to just stay there after the show to kill time so as you’d imagine, I was bored since I saw everything.

The show was overall really nice – interesting fashions for the simple comfort seeking woman (that’s how I’d describe it).